My mom told me to read this book.

I’d avoided The Guernsey Literary and Potato Peel Pie Society (Mary Ann Shaffer and Annie Barrows). The title suggested a folksy, precious Southern novel in which Lina Ree and Pru run a bakery in the small town of Jessamine Hollow, where a cast of colorful and eccentric characters learns some valuable piece of womanly wisdom, expressed in dialect, by the end.

When I expressed my concern, Mom said, “Would I recommend a precious Southern novel to you?” No. No, she would not. She also said that the tone of the book reminded her of my writing.

I got the book out of the library sincerely hoping I didn’t hate it.

The premise of the novel: World War II has ended. In London, Juliet Ashton has found modest fame as an author. She gets a letter from someone on Guernsey Island saying that he’d bought a book of hers, a collection of poems, and would she know how to find more? He mentions the Guernsey Literary and Potato Peel Pie Society, which was originally formed on the spot to avoid detection by German occupiers. Naturally Juliet is very curious and strikes up a correspondence, and eventually makes her way to the island to meet this literary society in person.

This book has two layers. The top layer is a fluffy romantic-comedy confection with a loveable, slightly bumbling protagonist, two or three possible love interests, and a cast of  (see?!) colorful and eccentric characters.

The bottom layer is dark, dense, and sour. It’s personal accounts of what life was like on an English island under German occupation, plus a glimpse at concentration camps and the havoc that World War II wreaked on all of Europe.

That bottom layer is so difficult to stomach that it needed all the sweetness it could get. For that reason, I forgave the romcom aspect. If you happen to like romantic comedies, which I understand that a lot of people do (?), then you’ll probably find this book just about perfect.

There’s not a whole lot of plot, just enough so the characters have something to do (this is an approving statement, by the way). The real strength of the book is how it makes the wartime accounts into personal stories for the characters. It’s one thing to read about how children were sent away before the Germans took over. It’s another to be sitting with a man whom you’ve been getting to know throughout the book, and hearing him talk of his seven-year-old grandson being taken across the Channel to some family he didn’t know for some unknown length of time–and he couldn’t take his pet rabbit with him. (And the reader knows that the rabbit was most likely killed for food later in the Occupation.) The personal touch made the stories much closer and more real.

But because of the light and fluffy layer, the impact of these stories is gentle. It’s easier to grieve what happened instead of simply shutting down from the horror of it.

The “good guys” in this book all have comfortably progressive opinions that mesh well with our twenty-first century sensibilities. In fact, the only characters who hold opinions common to the era are a couple of haughty, shallow women drawn with all the subtlety of a black Sharpie. I did agree more with the progressive good guys, obviously, but was a little disappointed that the authors didn’t attempt a little more authenticity.

Although the Literary Society, Juliet, and her friends are whimsical characters whose interactions are only half-believable, they’re good company to spend a book with. I found this book enjoyable and would definitely recommend it. 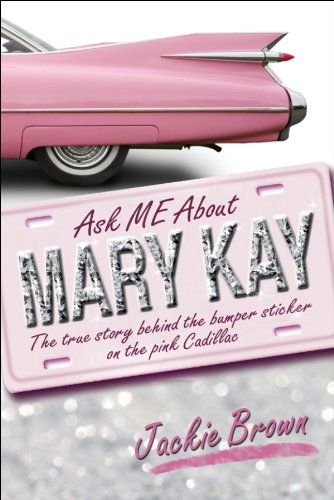 Ask ME About Mary Kay (Jackie Brown) is one of those random book selections that make me such a valuable resource to you. If you ever get the trivia question, “Who was one of the first consultants ever recruited by the cosmetics company Mary Kay?” you can remember this blog post and say, “Some woman who might be a narcissist but is a good enough writer that SJ read her book.”

Jackie Brown joined Mary Kay Cosmetics in 1963, very shortly after its founder (named, coincidentally enough, Mary Kay) formed the company. By 1966, she’d split off to resurrect a competing brand, Beauti-Control. I’m a dedicated un-fan of any multi-level marketing, direct sales, or similarly triangle-shaped companies, so when I began the book I wasn’t Team MK or Team Jackie. I finished the book with the same opinion, only encased with reinforced concrete.

The first half of the book, which was noticeably more polished than the second half, introduced the reader to Jackie as she was in 1963: a widow with a daughter, married to a second husband, working as a secretary at a law firm in Texas. Jackie wanted to make lots of money, but that was difficult for a respectable woman at that time. She was also grieving the death of a baby the year before–unnamed at the doctor’s recommendation. And lastly, she really wanted a wig. Wigs were apparently all the rage among professional women at the time.

She answered an ad offering a free facial and a chance to win an expensive wig. That’s how she met Mary Kay, and was recruited almost immediately. Within two and a half years, Jackie was receiving commission checks of up to $10,000 a month. (That’s $10,000 in 1965 terms, by the way, which translates to over $50,000 now.) She’d struck it big.

But it came at a price — that being one of Jackie’s favorite observations. She was working 12 hours a day, recruiting and selling and managing her team. She got pregnant again and found out that there was a good chance this baby would die too. She didn’t have that extra family time that she thought she’d enjoy; she ended up taking her daughter Sharon with her to meetings and classes. But she and her husband, Ned, agreed it was worth it. She didn’t say this, but it was patently obvious that they got used to all that money real quick. When it came down to it, they were not willing to give it up.

Jackie meticulously documents every step of her journey from adoring fan of Mary Kay to bitter rival. She has remarkable recall for events and conversations that happened nearly 50 years before (… SJ said skeptically). She neatly takes credit for many of the sales techniques still used by Mary Kay Cosmetics today. By the time we get to the part where Jackie and her friend Marjie, along with their husbands, decide to launch their own company, the reader is thoroughly educated as to why Jackie was forced into it by Mary Kay’s duplicity. Jackie herself was in no way ambitious, treacherous, or faithless. It appears to be very important to Jackie that the story goes this way. And since nearly all of the other major players are dead now, I guess Jackie wins.

(Note about dead people: Jackie’s husband Ned is very involved in the story from the very first. He’s mentioned on nearly every page. Then we get to the epilogue, wondering how everyone turned out all these years later. Ned is mentioned with several others who have passed on. Like, in a list. His name is #7 of 9. Even Jackie’s best friend and business partner, Marjie, got a deathbed scene. But poor old Ned, he’s dead, listed right before the opposing lawyer in the lawsuit that Mary Kay brought against Beauti-Control. Apparently Jackie didn’t really like Ned very much by the end.)

As much as I enjoyed her warm and personable tone, I wouldn’t trust Jackie Brown with an inch of my life. She seems to be just as calculating, deceptive, and greedy as she portrays Mary Kay. There are all too many people like them in the world, writing their books and selling their wares. But I don’t really admire them — the price they have to pay isn’t worth it.